I have been called ‘old’ one too many times today. It was only once and it was by a 22 year old volunteer from the Netherlands. All I did was yawn a few times in the middle of the day and he said, “Wow. You really are too old.” The first thing he asked me when I arrived on Wednesday was my age. I think he may have remarked on my too oldness then as well.

I guess I am a bit old in this situation, considering all of the other volunteers and staff are in their early twenties. I suppose a decade of age difference is a lot to them, as it would have been to me at their age. But alas, I cannot change my age and neither can they and we must just make the best of it. It is funny though.

This generation gap is taking place at Wild Blue Yonder, a white water river rafting company where I am doing a work exchange through Workaway for two weeks. WBY is located in Grande Cache, Alberta about 2 hours north of Jasper in the Canadian Rocky Mountains. It is an absolutely breathtaking area with wilderness surrounding it for miles and miles in every direction.

The owners of this rafting outfit are a bit older, I’m guessing early forties. But I don’t really see too much of them, usually it is just me and the kiddos. They are a good group, but I am quickly realizing how immature and naive I must have sounded at that age. Forgive me.

I began my stay here early Wednesday morning after an overly crowded all night bus ride. Needless to say, I was exhausted upon arrival. The man who picked me up, Yo the owner, had a meeting that due to my tardy arrival, he was running late for. So he kindly requested (I didn’t really have an option) me to walk the mile or so down to his house. So, with some vague directions, I did. I knocked on the door of the house where they live, also the WBY office and there was no answer. So then I walked across the street and down a few houses to the volunteer rental house and snuck in, grabbed a bed, and snagged a couple hours of sleep.

All too soon, my first day of river rat duty began. First task on the list – preparing the snacks for the days trips. Not too difficult of a job. Just get some cookies out of the freezer, make some hot chocolate and iced tea and pack it all up in a crate. Voila! It get’s to be a bit more of a hassle with the huge trips, like todays 30 kid summer camp trip and another 18 person rafting trip. Oy – that’s a lot of cookies.

The next task had a bit more to it. I was to play pirate #3 on a special themed raft trip for kids. First, I had to get fully geared up – wetsuit and jacket, footies and borrowed shoes. Then for the fun stuff. A pirate costume of sorts – ragged pants, a red and black striped shirt, a red sash, a skull and cross bone bandanna and the face paint. I got an a eye patch, a couple of scars, some girly eyelashes, and an anchor painted on my face by Gina the other owner. I was quite the sight. Unfortunately, my lack of sleep and newness to the situation made me forget all about taking pictures. Maybe there will be another pirate trip.

After getting the pirate gear on, we went to the office to pick up the passengers. It was two families with two kids each. One boy about 8 years old, a 7 year old girl, and two 5 year old girls, and their parents of course. They were super cute. After signing all the waivers and listening to the safety lecture we took them back to the house to get them geared up too. They also got some fun face paint and we picked out our pirate names. I was One Eyed Pippy. We ended up with quite a few captains, including the infamous Captain Morgan. He was favored by all of the adults, I wonder why…

We loaded up all the gear and the boat and the people in the bus and headed down to the Smoky River. I myself have never heard of river pirates, but this day there was a whole boat full. The river was rather calm and peaceful and we dutifully acted out the skit. We found a treasure map in an old bottle that led us to an island in the river. We searched the island for clues and found some bones that eventually led to the rest of a skeleton and a treasure chest. The kids were very excited and divided up the loot amongst themselves. The captain tried to steal their treasure and they fought him off with their foam swards. We all got back in the boat and headed downstream again.

Throughout the trip there was a lot of pirate lingo being tossed around. Ahoy, me hearties. Shiver me timbers. Lad. Lass. Landlubber. Blimey. And of course – Aaaarrrrgggghhhh! I even tried to sing a pirate song but could only remember the first line. Yo-ho Yo-ho, a pirates life for me. We sang several rounds. Here is the rest of the song, now that I have access to my other brain aka google.

At this point, the guide – or should I say Captain Jack Spare Oar – was looking a little like he had a case of the scurvy. I and the parents on the trip, thought he was simply hungover. But as we got further along and his symptoms got worse and worse, we knew something was up. He took a little break and let the other pirate, One Legged Sally, take over as guide. But, he took the captains seat again towards the end for the only rapids of the whole trip.

There was a lot of white water and it came mainly in one huge wave that washed over the boat. Everyone paddled like mad to try and quickly get over to shore to the meet up spot. We made it. The kids looked a little scared but overall they were happy. Luckily Yo (the owner) was there to meet us and was able to help load everything on the bus while I helped walk Dean (the captain) up the hill. He was pale and breathing heavy, his heart was racing a mile a minute  and he was stumbling at every step. I got him to the bus, and he collapsed on the seat. I rushed down to see if they needed help carrying anythings and then we all jumped on the bus and sped towards the hospital. Apparently Dean had a preexisting heart condition that showed up randomly and they didn’t know what caused it. He stayed in the hospital until evening and then took it easy for the next couple of days. He seems to be back to normal today. But everyone, including him, had quite the scare that day.

After the trip there was the cleanup. Putting the helmets, paddles, and life jackets away. Washing the wetsuits and hanging them to dry. Sweeping and mopping the changing areas. Cleaning up the snack paraphernalia. Oh my. I was so tired. I went to bed at ten and didn’t get up until ten the next morning. Holy. That was some good sleep, and I sure needed it.

Yesterday was pretty relaxed. I went grocery shopping in the morning and prepared some meals for later in the week. Cleaned up a bit around the apartment. It was – how do I say it – filthy. You could tell there were only college age boys here for the last several months.

In the evening we had a staff paintball party. This was my first time playing paintball, and I don’t think I was too horrible at it. We decided to play girls (and Yo just to even it out) against guys and we held our own. I think the final score was 3 to 2 guys winning. It was loads of fun and I have some choice sand dollars sized bruises to commemorate it.

Today began bright and early with a river crossing. WBY offers this service to hikers who want to go further into the Willmore Wilderness Park. They ferry the hikers and their gear across the river by raft. I didn’t have to do much, just help haul the boat and accessory items down the hill to the river, pump up the boat and help load the gear and passengers. Then I was free to wander the park and go up to a few of the look out points along the river.

It was a beautiful morning and I couldn’t have asked for a more stunning landscape.

The rest of the day was filled with more snack prep and cleanup and helping with the 30 kids from summer camp – putting their gear way and washing their wet suits. I was happy to have the evening off and went for a walk around town to get a feel for the lay of the land.

Tomorrow involves more snack and lunch prep and I think my first real raft trip. Let’s see if this ‘old-timer’ has what it takes. Wish me luck!

"The purpose of our lives is to be happy." - Dalai Lama 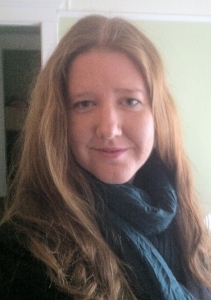 Welcome. My name is Rene and I am the Repurposed Redhead. I quit my job, sold my belongings and began the search for a deliberate and purposed life. I am on a grand adventure with three goals in mind: Helping, Exploring, and Learning. Join me as I attempt to figure it all out one day at a time. -Rene

A Milwaukee State of MindMay 27th, 2016
Meeting the boyfriends family and enjoying a drink at the infamous Bryant's.

COPYRIGHT © 2015 Repurposed Redhead **** All text and images displayed on www.repurposedredhead.com are protected by Copyright Law. Unauthorized use and/or duplication of this material without express and written permission from this blog’s author and/or owner is strictly prohibited. Excerpts and links may be used, provided that full and clear credit is given to Rene Cappuccino (aka Repurposed Redhead) and the Repurposed Redhead Web Site with appropriate and specific direction to the original content. If you would like to use any of the imagery or text displayed on this site, please send a request to renecappuccino@gmail.com ****
%d bloggers like this: